After a ten-week period of work and coordination, Illuminati Club, a Chilean LGBTIQ+ pub,  and OTD Chile, on behalf of those affected by the incident, signed a settlement to the discrimination that affected six trans activists in the Bellavista neighborhood, who expressed regret for the actions of their security team.

After OTD Chile’s denunciation, it became clear that the activists were not misusing the lavatories and that discrimination occurred when the security guards did not respect their gender identity. Therefore, after a series of coordination meetings, the Club will implement the OTD’s demand for five points, including the creation of gender-free toilets, the installation of an inclusion poster, and training for Illuminati staff on sexuality and gender.

Illuminati Club pointed out that ” we are committed for more than a decade to be an inclusive entertainment space and today, thanks to this agreement, we reinforce our label of being an open space to trans diversities and respectful towards the LGBTIQ+ community”.

For its part, OTD Chile pointed out that ” people who question gender binarism are the most discriminated against, even within sexual and gender diversities, and that is why in this agreement we ensure the integration of trans, intersex and non-binary people, so situations like this one don’t happen again”.

With this agreement, both organizations overcame the episode and agreed to continue working together for inclusion and respect for the LGBTIQ+ population. 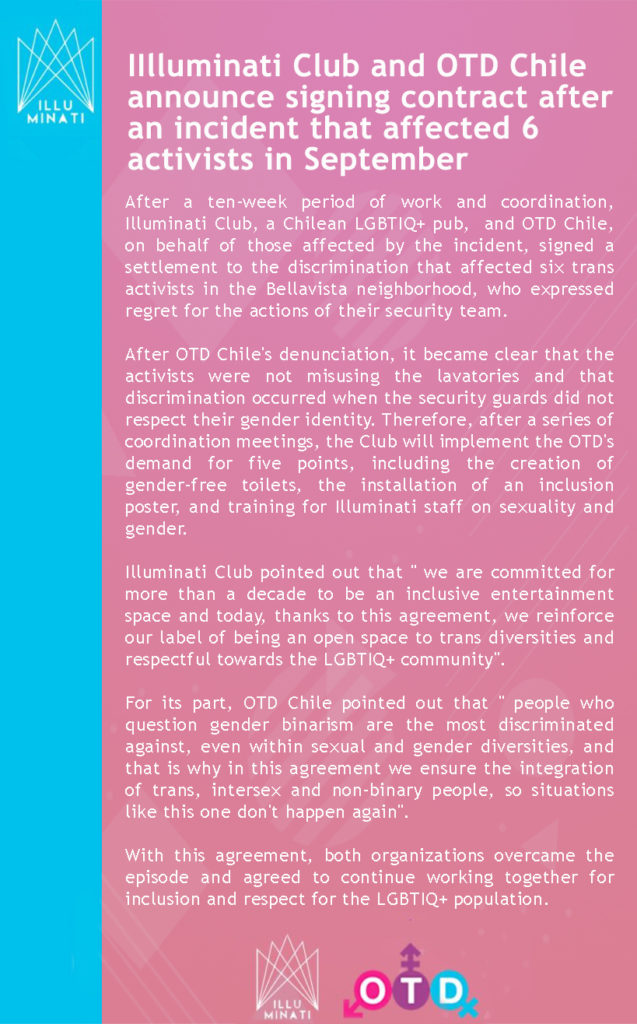 TransFest 2020 organized by OTD Chile will take place at Parque Quinta Normal on March 21st
TransFest third version will be on March 21st of the current year from 11:00 to 20:00 hrs. at Parque Quinta Normal, along with the support of El Desconcierto, Map8 ONG and Chueca Bar.
Public letter to the states of Chile and Venezuela, Fernando Ojeda migrant trans activist
On June 9th, 2020 since the covid-19 pandemic started, I went to work and as everybody else I got checked because the region where I live was under quarantine. I was carrying my documents and safe-conduct so everything should be fine. It should have been as any other check. But because I was a trans person and migrant it wasn’t. My ID Card, safe-conduct, passport and legal documents DO NOT IDENTIFY ME.
Work of art pays tribute to the trans memory at the Santiago library