The social worker and the psychologist Dania Linker, on behalf of Organizando Trans Diversidades, OTD Chile, attended last 19th February at the 60th session of The Committee on the Elimination of Discrimination against Women (CEDAW) in The Palace of United Nations of Geneva, thanks to the support of COC Nederland.

Dania talked about the situation of trans women, trans girls and intersex people, in instances where OTD was the only trans organization from Chile which attended the event. 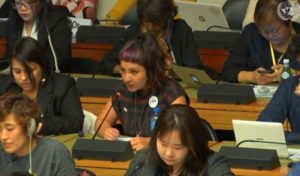 Linker, who is also Coordinator of the T-Survey project, emphasized that the current Ministry of Gender Equality lacks public policies to serve the trans and intersex population. This is because the Government has been focused on the cisgender women.

For example, statistics that the country currently has about the female population do not differ sex assigned and gender identity at birth. Besides, Linker spoke about the non-existent law which can allows the change of legal name and legal gender recognition without humiliating judicial proceedings.

“Judges requested a mental disorder diagnosis and Gender Dysphoria and Disorders of Sex Development diagnosis. Judges also requested serological tests which are invasive, and degrading performed by the Forensic Medical Service, and even genital surgeries and forced sterilization. Similarly, intersex girls continue to be victims of genital mutilation”, said Linker.

In her speech she also highlighted the long way that the Gender Identity Law has had for almost 5 years in Congress, and that its approval is now threatened by the next Government, despite the worrisome situation that was shown by a study of transgender people performed by Linker.  “The T-Survey showed high levels of discrimination in terms of family, health and education. For example, 56% of the participants attempted suicide, 84% of the participants attempted suicide at least once before the age of 18.”

Dania encouraged the Committee to review the situation of trans women and trans girls in Chile, especially by the non-recognition of their identities. OTD participation at the session of the CEDAW Committee is an important milestone for the association and for trans people because it increases the visibility of social demands delayed for years. 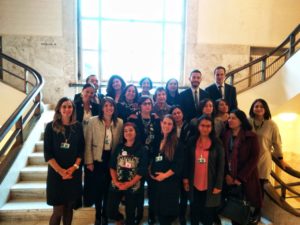 The researcher recognized the difficulty of carrying this specific message from other organizations that stands for majority groups. “It is hard to explain specific situations and scenarios of discrimination that trans population have to live. These situations are shown in our report and there you will be able to see the significant advance by enabling the change of legal name and change of sex in the Civil Registry.”

Linker had the opportunity to share with different leaders of NGO’s of the world. She also had meetings with the rapporteur Gladys Acosta Vargas, ILGA World, and International Women’s Rights Action Watch Asia Pacific.

Situation of trans persons in Chile

Inter-American Court of Human Rights declares responsible to the Republic of Perú for Azul Rojas Marín Human Rights violation based on her sexual orientation and gender expression
The Inter-American Court of Human Rights declared internationally responsible to the Republic of Perú for personal freedom, personal integrity, private life,  to not being tortured, judicial warrantees, and judicial protection human rights violation of Azul Rojas Marín, in relation to the obligation of respect and guarantee said rights without discrimination, and adopting legal measures disposition.
The LGBTTTI Coalition urge the Secretary General of the OAS Luis Almagro, to carry out his compromises in relation to human rights during his second mandate
As Luis Almagro was reelected as Secretary General of the Organization of American States (OAS), at the Special Session of the March 20th, 2020 General Assembly, the Lesbians, Gays, Bisexuals, Trans, Transsexuals, Cros-dressed, and Intersex Coalition (LGBTTTI) of Latin America and The Caribbean that work within the OAS framework, urged him to reaffirm his compromise with human rights of all people without discrimination, based on their sexual orientation, gender identity, gender expression, and sexual characteristics as well as sexual workers human rights, sexual rights, and reproductive rights.
Letter on human rights violations in Chile
We hereby express the conformation of the Coordinator for Sexual and Gender Dissidence, constituted on October 23 of this year due to the national contingency. We are a Coordinator that, nationally brings together as many organizations, institutions and self-convened individuals belonging to the LGBTIQA+ community and related dissidents, To date, we have developed three open assemblies, in which we have gathered more than 200 people, who have historically struggled for the respect and vindication of the human rights.
Connect with us