In 2012, the first trans man came to the Hospital Complex Dr. Sótero del Río. Derived from the Program of Reparation and Comprehensive Care in the Field of Health and Human Rights (known by Spanish acronym PRAIS), attending victims of the dictatorship, to the infectiology psychosocial team known as “Oficina Arcoiris.” In there, the multidisciplinary team (consisting of professional women, two social workers, and one family counselor) receive the person, initiating a long and hard work in order to serve the health necessities of transgender people.

Jessica Lillo, the family counselor, had a crucial role in this program. She worked 22 years in the Hospital and during 10 years she was part of the infectiology psychosocial team, attending people that live with HIV/AIDS. That’s why, along with the social workers Agustina Morales and Laura Toledo started to receive, guide, and manage medical appointments for transgender people who were referred from different programs and places. At the same time, they seek support for training and guiding other teams that needed it in OTD Chile.

In the past, other professionals built a special type of support to trans women, but when this case appeared, everything was removed and they started to create a new support line. “Transgender people opened a new necessity and challenge that we didn’t consider before, focused on an integral health care from a gender and rights point of view,” she says.

At that time, they saw the necessity of facilitate health care, for example, to a person that have never accessed to any gynecological care, where other professional protocols and sensitivities were required. “We needed that when that person was derived to a gynecologist, the professional had to be sensitive, explain the procedures, something that it’s done, but sometimes there is no time because we are always in the emergency,” she says.

If at the beginning there was resistance, it is not so different present today; if there is no pathology , nor life or death, it is no priority. However, through a training and approaching ongoing work, where OTD Chile has contributed, they were gaining sensibility.

The documents 21 and 34 for the use of social name was, without a doubt, a significant support that enhanced the work of a small circuit of support consituted by the midwife Jeannette Galvez and the endocrinologist Dr. Paula Cartes. “This is something that has to do with the human rights, that helps to understand that the gender identity is a necessity as important as any other in the field of health.”

The counselor values the progress and creation of the program as an example to follow in other health centers. “When you face the trans topic there is a direct interpellation to the sexuality of everyone and that gives us a feeling of uneasiness, stress our own believes,” Jessica explains.

This was the work that professionals took and showed to the head of the center of ambulatory responsibility, the doctor Luis Contreras. With 30 years of experience in public health and two years working in the Hospital Sótero del Río, he was entrusted to manage part of one of the biggest health centers of the country, and had the will to support the program. 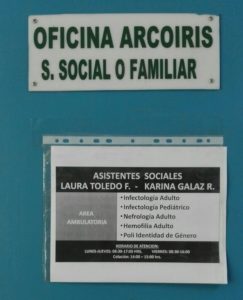 He properly speaks about this topic, has had to destroy prejudices and inform himself. He didn’t know anything about transgender people- When they organized a conference, the concern was shown. The “clandestine” work of the professional of Oficina Arcoiris comes to light, and they summoned a work table that ended in what is now the program.

“We achieved that the Health Service, operated by the Dr. Antonio Infante, put forward a resolution and resources, due to the hospital was a little more resilient,” he says. “One of the first thing that I was asked was: who you asked for permission Dr. Contreras?, obviously I answer no one, because you need permission to be in charge of a health problem.”

With secured resources to buying the hormonal replacement therapy of 100 people, along with the incorporation of the medications to the Hospital’s pharmacy, in order to accelerating the delivery, they felt safer to take the first official step of the program the last January 30. In an auditorium full of users, professionals and activists, history was made. Now the biggest work is to eliminate the myths that exist in the almost 3,500 workers. “We can’t force anyone, there must be conviction, there must be doctrinal clarity to get involve in a program of this type,” Contreras says.

For 2018, it is expected the conformation of a stable team that will have its own physical space. For example, there are surgeons able to perform gender reassignments Also, there are works with the IT Department so that the main name will be people’s social name , and the legal name in parenthesis. That’s something that doesn’t happen now.

How do you imagine the program in a few years?

Whit a lot of contradictions because in the team not all are experts in this topic, there are people that don’t allow the opportunities, that have a pathologist point of view. We must lead this process of formation and elimination of myths about people that are much more medical and don’t see the suffering. I think these are complementary points of view and clearly there is a ideological dispute. However, is a non-return topic, that creates a discussion that will be there for years. This is an Hospital that has great strength, what we have done in a year is a lot, and with it we will have possibilities in new areas.

On the part of Health Service, the midwife Cynthia Arenguiz, who works in the management in the area of Sexual and Reproductive Health, contributed to the opening of options, gaining resources for the hormones needed for the hormone replacement therapy and the dictation of the Resolution Nº477 that approves the program. It was part of those work tables where it was established, for example, that was not necessary to ask a psychiatric certificate in order to access to a treatment, but it was necessary to have psychological care. Now the psychosocial team is more complete, because there are four endocrinologists and the recent incorporation of a psychiatrist.

She recognizes how hard it was, despite the huge support that received, based by the historical work of professionals in the past. He torn with emotion when speaks about how has been working in this topic and helping so many people. The program has generated such a high stake that it has become a lighthouse for other care centers, in spite of there is a Resolution or Ministerial Order, the Service was prepared of this need and give institutional support to the development of the program.

“I have worked with different leaderships and they haven’t had that lucidity when someone present a disruption. This is a lateral thinking and there is when someone generates innovation,” says Contreras.

Where and how it works?

Right outside the metro station Hospital Sótero del Río, entering the hospital on the left is the Center of Outpatient Care. I walk with caution, guided by Cynthia for many hallways. At the end of the interview with Cynthia and Dr. Contreras, she guides me where Laura Toledo works, the “Oficina Arcoíris.” It is not easy to recognize, but you can ask for help. She is not there, we arranged a meeting for the next week.

When I returned, I walk with security and easily find the place. She receives me on a small office and with the smile of always. Laura is the opposite of prejudices that exist in the public workers, an informed, dedicated, and welcoming professional and we should be thankful for having her. She is who attends people diagnosed with HIV and now receives users of the Hospital Gender Identity Program.

She has been working there 11 year and understand this topic. She was one of the professionals that organized a series of training where OTD Chile was present. That is how the topic has been socialized between professionals. The day of the launch ceremony, there were 65 users, two weeks later increased to 90, and there is an average of 3 per day.

The program is available for users of the 7 communes that the service has in charge: Puente Alto, La Pintana, La Florida, San Ramón, La Granja, Pirque, and San José de Maipo. You can only access to the program by living in one of these communes. The first step is to come to any information module and request for the attention of the social worker. A meeting will be appointed where they will explain you about the attention and you should fill a sheet to know if there is some social problem to resolve.

Then, the psychologist evaluates if you need accompaniment, and gives you the pass to the endocrinological attention to start the process of hormone replacement therapy. In the first medical control, you are prescribed with a series of free exams in order to know your health status. With the results, and becoming aware of the upcoming changes, the process of hormone replacement therapy starts.

The time is delimited, considering the condition of the waiting lists in the public health. The psychosocial attention doesn’t take more than a week, while the medical referral takes between 2 or 3 weeks. On average, a transgender person is receiving the hormone replacement therapy in about two months. “The waiting times are short. This is because it is a new program and the people who work here is really interested in provide good healthcare, the professionals have the sensibility required for this topic, and that allowed overbooking in different branches,” the professional explains.

In terms of the treatment’s results it is impossible to categorize them. “The idea is that the gender transition is appropriate with the necessities of every person, then, with the doctor, are discussed the possibilities for every person. It is a personal process, everyone are different.”

Javier is one of the user of the program. He identifies himself as a non-binary trans. His first rapprochement to the hospital was in December, 2017, after a year of assuming his trans identity. Now he is 35 years old, waiting for the physical and blood exams that were prescribed to him in order to star with the testosterone. He works as dog’s trainer.

He came to the hospital accompanied by other user, who guided him in the process. He was received by the professionals. He considers that these professionals are very good, despite the fact that his social name hasn’t change in the medical record. His main objective is change his voice. “In the daily life, they treat me as woman, lady, miss, and that bothers me. Once was discomfort, but now is like a stab in the chest,” he says.

The only problem is with the diagnose that was assigned to him, first as a gender identity disorder, and then as gender dysphoria, something that must be changed in the IT Department. Professionals say that it is a matter of software permits that they use; however, there is a case of a user that was diagnosed as: health-transgender non-binary.

About the professionals and people resistance that don’t see the necessity of creating this type of healthcare, it is clear: “Is important, we want changes that are crucial, in other words, to make everyday things there is discrimination, and those little discriminations become bigger and bigger, and you must be psychologically stable and strong to resist”