(November 28th, 2019).- Earlier this year, we got a message from Bruno, a young trans student who related the discrimination he suffered from the school authorities of the school San José Del Carmen, located in the commune of Palmilla, Libertador Bernardo O’higgins Region, for not allowing him to get graduated with his social name. We asked him a little bit more about that, and he gave us more important details. Despite the fact that it was difficult for his family to understand he was transsexual, his mother supported him, and even she went to the school with Bruno to explain the transition theme and ask them to respect his identity. However, according to Bruno “that was the moment when some problems occurred, because they didn’t know what was happening to me. We had an agreement where they must call me by my social name, we agree about the use of the bathroom. Most of the teachers took it well, except for some of them. For example, the art teacher always called me ‘Alexandra’ and she said that she’ll never call me by my social name because I will always be a girl for her, and that if in the list I don’t appear as a boy, she won’t call me Bruno. Besides that, many times she has put me down in front of the class.”

Besides it wasn’t the only problem Bruno had. He said that, even though having problems with the art teacher, he also had problems with the principal, “the first time was because my girlfriend went to the school with me to see me walking. He saw us holding each other’s hands and didn’t say anything. Some days later, she went to pick me up and he denied her the entrance because ‘it wasn’t appropriate for the other students to see her with me. He didn’t let us to get close when she was in or near the school. After that, the problem with my diploma started. I tried to talk to the principal and with every people but the only answer I got was that if I’m not legally Bruno, they wouldn’t change anything, and they won’t give me my document no matter what I do. I have gone everywhere looking for some help and here I am, still fighting to be helped.”

Two years ago, it exists the Circular 0768 of the Superintendency of Education that recognize trans students and oblige the educational establishment to respect their social names, uniform, and use of bathroom according to the perceived gender identity. But, according to Kris Córdova (coordinator of the Education Unit of OTD Chile), in an article published by the association this April 26th, explained “our experience working on educational establishments is that a comprehensive public policy to implement the circular was missed. When you go to the schools, you see that they don’t know how to implement it, or they just don’t know it. It also happens that the institutions don’t have anyone to ask about the circular, and this have fell back onto the organizations of the civil society that, in other words, we have had to cover to improve the implementation. As a recommendation, instead of circulars, there must be comprehensive public policies that consider goals, resources, and monitoring.”

Bruno fights for his identity, a Camilo Jerez Ilustration.

About Bruno’s request, the coordinator of the Legislation Unit and Public Policies of OTD Chile Franco Fuica, wrote an email to the principal Luis Mendez Staub to demand respect of Bruno’s social name in the graduation ceremony, besides giving him two titles. “We are worried about his psychic integrity to be damaged, because he is not allowed to use the name which he has been recognized by the entire school community in an important ceremony such as the high school graduation”. In the missive, Fuica adds the need to replicate the good practices of some educational institutions: “We have seen that in some establishments two graduation certificates are given. One is with the social name that is given in the graduation ceremony, and the other one with the legal name of the student, so in the future and maybe next year, this document that nowadays is not legal, it will be legal after the name and registral sex change (according to the Gender Identity Law).”

The non-recognition of trans kids and teenager’s identity can lead to suicide, like in the case of Matias Guevara (16 years old) that collapsed in May 2019 due to the school bullying he lived in the school Sagrado Corazón of Copiapó. According to the results of the poll ‘Encuesta T’, 42.5% of the asked people declared that they recognized their gender identity between their 12 and 18 years old before being of legal age. But, the most alarming thing was that 55.2% declared to have a suicide attempt and an 83.6% of them said that it was between their 11 and 18 years old, that is, during school age.

Also, according to recorded figures of the Superintendency of Education, during 2017, at the request of OTD, being current the Circular 0768, the complaints increased to 12 in one year: 1 in Tarapacá, 2 in Antofagasta, 1 in Coquimbo, 2 in Valparaiso, and 6 in the Metropolitan Region.

Continuing the letter that Franco Fuica sent, the person in charge of school coexistence of the school San José del Carmen, Andrés E. Mejías Cornejo, answered instead of the principal, and said that since March 19th, 2019 they accepted the request of school coexistence and respect for gender identity, made by Bruno with his guardian Zulema Cáceres; quoting in the email what was established that day. And here we copy:

In the same email, Mejías Cornejo explained that on November 5th, 2019 they let Bruno know that he will be called by his social name in the graduation ceremony, arguing the following: “we, as an establishment, must clarify that we have opened up our doors to Bruno, but emitting a high school certificate with his social name is against the educational regulations that rule over us and against what is established in the penal code in the IV title (in Chile) about the falsification of public or authentic documents (…)

Fuica, in disagreement with this answer and worried about the integrity of Bruno, persevered until talking about the case with the mayor of the commune of Palmilla, Gloria Paredes, who talked to the educational authorities about the importance of respect Bruno’s identity and that his case could be copied as a good practice in the educational institutions.

When it was believed that it was not possible that Bruno would graduate with his social name, on November 22nd, he sent Franco Fuica the photography of a document where it reads an agreement that had been signed with the person in charge of school coexistence of the school San José del Carmen, that establishes to respect the following points in the graduation ceremony of November 28th: 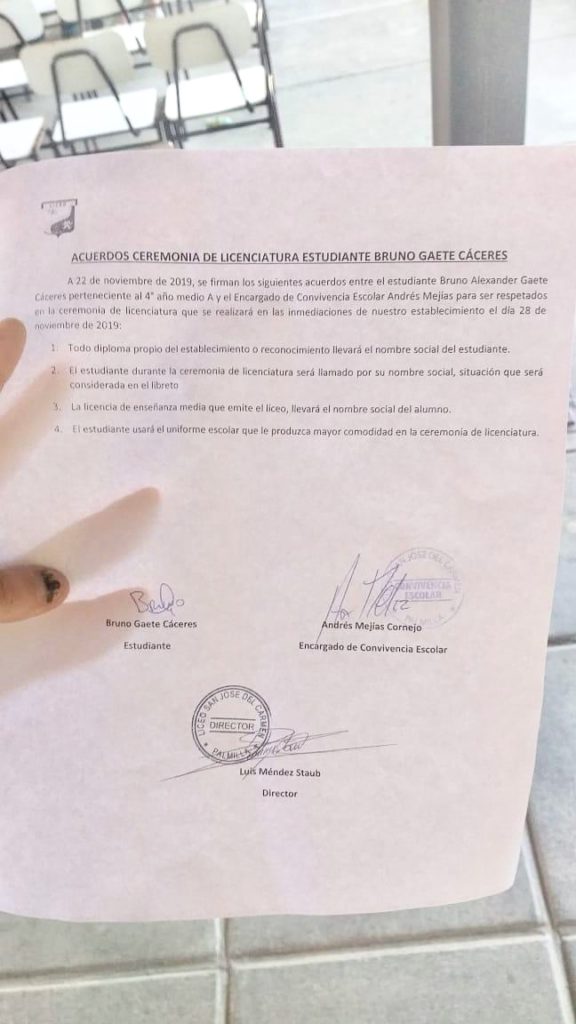 We asked Bruno what he thinks about the agreement of the message and told OTD: “I had a graduation ceremony rehearsal and I was not going there. Meanwhile, the head of the school coexistence called me to explain me that he had to talk to me about the graduation. When I went to his office, he told me that they are going to call me Bruno, give me my certificate with my social name on it, and that I was going to be able to wear the most comfortable uniform for me.”

Today, November 28th, against all odds, Bruno is going to graduate with his social name, and by receiving his high school certificate he won’t just celebrate and show this document with pride for have been culminated this academic period, but also have won a battle in his life succeeding to be recognized his right to be.

Remember that by finishing this note, 28 days are left to become effective the Gender Identity Law in Chile. If you know about a case of discrimination or if you are victim of discrimination in your school, please do not hesitate to file a criminal complaint at the Superintendency, and if you need help or consultantship please write to [email protected]