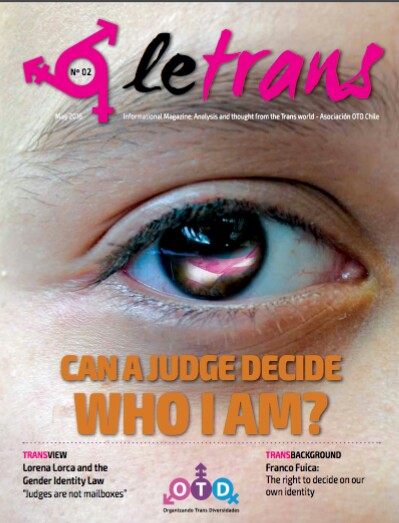 With this second number of our magazine Le Trans in 2016, we are now taking a new step towards visibility and positioning of the trans culture in Chile.

If the first number has demanded hard work for us, the second number hasn’t been different and we are happy that we achieved this.

For this number, we have worked gathering information and magazines which show the situation on the Gender Identity Law process and the process that us, as a Trans* movement, have been working on in order to achieve the approval of this important normative.

After months of several work trying to convince the government which showed itself closed to attend the main demands of the Trans* movement, such as counting on an administrative Gender Identity Law which includes the right of Trans* children and Teenagers, finally with the impulse of the Supreme Court, they finally got to understand this.

This wouldn’t have been possible without the constant strength of our allies of the Frente de la Diversidad Sexual, Fundación Transitar and Sindicato Amanda Jofré.

The international support has also shown in our struggle, we would like to give special Thanks to Mauro Cabral for his collaboration in order to activate the support of international organizations which much help to grant respect on the Gender Identity of every person in the best way possible.

A new year full of challenges is now coming, in which we hope to move the biggest amount of collaborators to fight for the most basic right of all of the existant, and in which all of the other rights a person must have are based.